The New York Times warns against the growing use of high-end architecture as a tool for self-promotion?

Oh, puhleeeeeze. Our economic SYSTEM is nothing if not a continuing tribute to the low self-esteem of ostentatious wealth, trying to pass itself off as a quiet, behind-the-scenes-type who only has attention drawn to them because, uh, their house or car or clothes SCREAM “I’m cool and you should know it” [which translates to many of us as : “I’ve succeeded in everything except finding out who I am and how to be REAL to other people except through memes created by the marketing industry that are passed off as lifestyles and even entire world views”].

Sure, it’s just “another brick in the wall” but think also about how many insatiable and rather un-remarkable people have built monuments to themselves over time. They do it everyday in the cities, in the suburbs, all over. Isn’t that why so many of us advertise these memes on chests, asses, wrists and everything? Well, I suppose if having lots of money makes you remarkable, then, uh — ok

Regardless of how big or elaborate your watch, car or structure is : it doesn’t change anything. And you know it.

So, meanwhile, bless their hearts! Raise the roof for the next DeathStar! 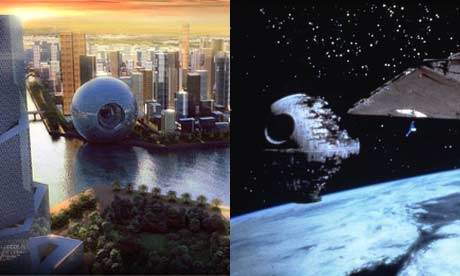 As our dear, late and fearless leader would have said, “And so it goes…”