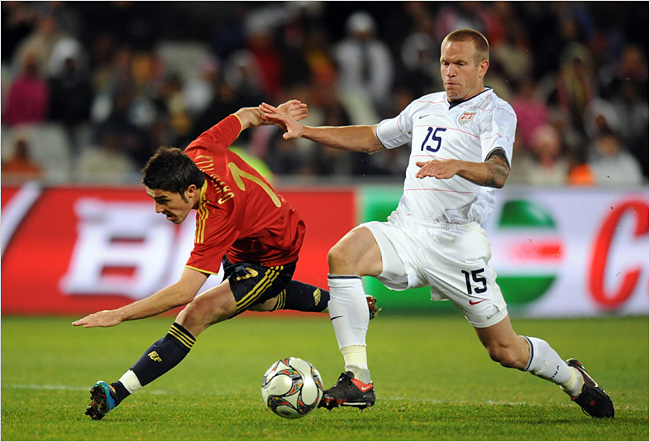 JOHANNESBURG Ã¢â‚¬â€ On an unlikely United States national soccer team, there is no more unlikely player than defender Jay DeMerit, whose nickname is Rags to Riches and whose adventurous career path to the Confederations Cup involved van rides on boxes of socks and underwear, living in an attic and being hugged by Elton John.

Jay DeMerit played tenaciously on defense for the U.S. in its win over Spain in the Confederations Cup semifinals.

Ã¢â‚¬Å“IÃ¢â‚¬â„¢m probably the most improbable of all the improbable events going on,Ã¢â‚¬Â the chatty DeMerit, 29, said.

He grew up in Green Bay, Wis., played three sports in high school and went to the University of Illinois-Chicago, where he did not remind anyone of Franz Beckenbauer. Some young players refine their skills at the academies of Barcelona and Manchester United. DeMerit played summers for Green Bay 7 Up.

He designed the team logo and spent most of his time as a groundskeeper for the local school district. Ã¢â‚¬Å“One year, I graduated from cleanup crew to lawns and hedge clippers,Ã¢â‚¬Â DeMerit said.

Eventually, he played with the developmental team of the Chicago Fire, but went undrafted by Major League Soccer upon graduation in 2003. His closest contact with the big time, DeMerit said, came one day when DaMarcus Beasley of the Fire walked into the bar where he worked.

Ã¢â‚¬Å“Nobody in here knows you, but I do,Ã¢â‚¬Â DeMerit said he told Beasley, handing him a free drink. Ã¢â‚¬Å“Good luck with your season.Ã¢â‚¬Â

Beasley was soon headed to Europe, and DeMerit would even beat him there, but BeasleyÃ¢â‚¬â„¢s career was flying first class while DeMeritÃ¢â‚¬â„¢s was stowed in baggage. He had a gnawing feeling that he could be a professional, but while Beasley ended up first at PSV Eindhoven in the Netherlands in 2004, DeMerit alighted in 2003 at Southall, a semiprofessional team outside of London. If Dante had a seventh circle of soccer hell, this was it.

DeMerit lived with a soccer-playing friend, Kieron Keane, in the attic of KeaneÃ¢â‚¬â„¢s motherÃ¢â‚¬â„¢s house. Bed was a mattress on the floor. The pay was about 25 bucks a week. Practices were held on Tuesdays and Thursdays, and games were played on Saturdays. On Sundays, they played in a pub league.

Each Saturday morning, the Southall manager picked up DeMerit and Keane in a blue minivan with no rear windows. During the week, the van was used to haul dry goods for sale at a market stall. The human cargo had to make do.

Ã¢â‚¬Å“We used to play paper, rock, scissors,Ã¢â‚¬Â DeMerit said. Ã¢â‚¬Å“The loser had to sit in the back on top of boxes of socks and underwear.Ã¢â‚¬Â

Ã¢â‚¬Å“He got to sit in front while the manager rolled his own cigarettes,Ã¢â‚¬Â DeMerit said.

Five or 10 people tended to stray past for each match.

In 2004, SouthallÃ¢â‚¬â„¢s assistant moved up a few rungs on the English soccer ladder to Northwood. DeMerit followed. He thought his style of defense was perfectly compatible with the English game: aggression without anger.

He relied on speed, strength and agility as a defender. He did not particularly need skill, he figured, only a determination not to let those with skill get a kick on the ball.

During a preseason match for Northwood, DeMerit impressed the manager of another club, Watford, which played at a level just below the English Premier League. An audition with Watford led to a contract for the 2004-5 season. DeMeritÃ¢â‚¬â„¢s career began to ascend, as if he were a small-town singer who found his big-city voice on Ã¢â‚¬Å“American Idol.Ã¢â‚¬Â

On May 21, 2006, Watford met Leeds United in a playoff for promotion to the Premier League. Before the match, Aidy Boothroyd, the Watford manager, told USA Today that DeMerit was brave and essential in defense.

Ã¢â‚¬Å“He will put his head where other people are not even prepared to put their feet,Ã¢â‚¬Â Boothroyd told the paper.

As it happened, DeMerit put his head onto a corner kick, directing it into the net for the gameÃ¢â‚¬â„¢s first goal. Watford won, 3-0. Still, the United States did not offer him a spot on its 2006 World Cup team.

If DeMerit had not stirred Bruce Arena, who was the coach of the United States team, he had caught the attention of Elton John, an inveterate soccer fan and WatfordÃ¢â‚¬â„¢s former chairman.

During training for the 2006-7 season, DeMerit said that John arrived and said, Ã¢â‚¬Å“WhereÃ¢â‚¬â„¢s the American?Ã¢â‚¬Â He wanted to talk about football, but the N.F.L., not soccer. Ã¢â‚¬Å“He wanted my opinion on whether Brett Favre should leave the Packers,Ã¢â‚¬Â DeMerit said.

John, according to DeMerit, wore two Super Bowl rings, saying he was friends with the Kraft family, which owns the New England Patriots. Ã¢â‚¬Å“He threw one at me and said, Ã¢â‚¬ËœHave a feel of that,Ã¢â‚¬â„¢ Ã¢â‚¬Â DeMerit said.

Ã¢â‚¬Å“ItÃ¢â‚¬â„¢s pretty crazy when you get hugs from Elton John,Ã¢â‚¬Â DeMerit said.

After niggling injuries, he finally got a start with the United States national team in 2007. And when Carlos Bocanegra was sidelined with a hamstring injury at the Confederations Cup, DeMerit eagerly slipped into central defense, playing superbly against Spain in the semifinals.

Ã¢â‚¬Å“He has a good balance between being hard and aggressive and still making good decisions,Ã¢â‚¬Â Coach Bob Bradley said.

Now comes a rematch with Brazil, which defeated the timid Americans by 3-0 in group play. DeMerit said he would approach Brazil on Sunday the way he has always approached soccer.

Ã¢â‚¬Å“I understand where I am and where I need to go,Ã¢â‚¬Â DeMerit said. Ã¢â‚¬Å“It comes with being patient and waiting for an opportunity and not being daunted by the task ahead.Ã¢â‚¬Â